Files under 20mb can be sent using email to your sales representative.  Files larger than this must be sent to us via a program such as Dropbox, WeTransfer or a program of your choice.  Once you have uploaded your files to your folder, please get the share-link for this folder and send it via email, along with the name of your project and your sales representative to sales@halprint.com

Save Photoshop files as PSD, PDF or .JPG. Colour mode should be CMYK, B&W* or Greyscale, 300 to 400 dpi, 1/4″ bleed – please indicate that a bleed has been included. Rasterize all text. RGB files do not separate properly so please convert to CMYK.

* Black and White Photoshop images are actually Bitmap Colour Mode and should be 600 to 1000 dpi.

Bar Codes — Machine readable (often OCR), preprinted vertical bars used extensively in labelling for automated materials, handling, inventory control, and point of sale terminals. A multitude of systems exist, usually not compatible with each other and the respective reading devices.

Bleed — An illustration that extends to one or more of the edges of a printed piece; bleed illustrations are usually printed 1/8 beyond the planned trim edge(s). Term applied to a lithographic ink pigment which dissolves in the fountain solution and causes it to be tinted. The discolouration of dyed pulp and paper due to the removal of colour by liquid, thereby making it susceptible to staining other materials it contacts.

Caliper — The thickness of a sheet of paper measured under specified conditions, generally expressed as one thousands of an inch (0.001), mils or points; measured with an instrument called a micrometer or caliper. Dot Gain- The gain in size of the printed dot, as a result of the ink, paper, printing pressure, pre-press operation, or any combination of these. Since the dots printed are larger then planned, this can be a defect evidenced by darker tones and / or different hues.

Dummy — A preliminary layout or presentation to show the style, form, size or shape of a printing job.Four Colour Process- The printing of a full colour picture or drawing by the use of four separate process printing inks: yellow, magenta, cyan, and black.

Hickeys — When foreign material sticks to the printing press blanket or plate in an image area, it interferes with the transfer of ink to or from the blanket surface. The printed imperfection created can appear as a hickey (a white area around a dark centre); can be caused by dirt on or around the press, dried ink skin, paper or coating particles, etc.

Tack — Refers to the internal stickiness (cohesion) of an ink; a measurement of the resistance to splitting of an ink film between two separating surfaces; tack is necessary in lithographic inks to insure adequate film splitting at the thin ink film thicknesses necessary for this planographic process. High tack does stress the paper surface. If that film splitting stress is sufficient, the paper surface can be disrupted, with pick resulting. Tack is an ink characteristic that can be measured by instrumentation (such as with an inkometer); other ink fluid characteristics are described by viscosity and length.

Trim — Indicates the maximum width of finished paper which can be made on a particular machine. To remove from the edges of a sheet or roll, excess or unneeded paper. The excess of paper allowed around a printed piece for bleed and / or handling and later trimming.

Varnish — An oil used as the vehicle in printing inks which has been bodied by heat (or chemically), or by the addition of gums, resins, or other materials. A thin coating as in applied to a finished printed job for protection or appearance.

VOC — An abbreviation for volatile organic compounds. Since these are OSHA and EPA regulated type materials, they have become of concern in both inks (evaporative solvents that might be used in heat – set, web offset inks) and fountain solutions (alcohol). Alternative materials and processes are being examined for these products so necessary to printing.

Work and Turn — Printing the second side of a sheet of a paper by turning it over from left to right or right to left, using the same edge of the paper as the gripper or lead edge. 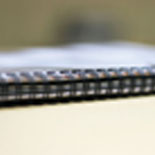 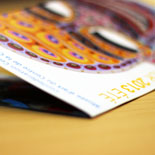 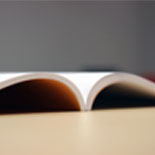 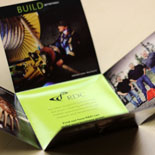 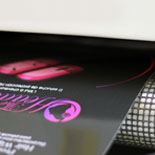 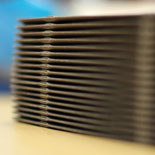